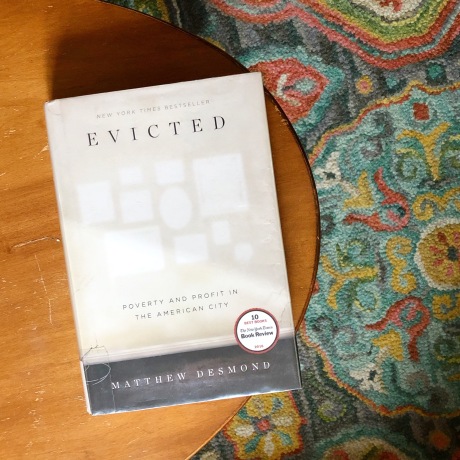 From Harvard sociologist and MacArthur “Genius” Matthew Desmond, a landmark work of scholarship and reportage that will forever change the way we look at poverty in America

In this brilliant, heartbreaking book, Matthew Desmond takes us into the poorest neighborhoods of Milwaukee to tell the story of eight families on the edge. Arleen is a single mother trying to raise her two sons on the $20 a month she has left after paying for their rundown apartment. Scott is a gentle nurse consumed by a heroin addiction. Lamar, a man with no legs and a neighborhood full of boys to look after, tries to work his way out of debt. Vanetta participates in a botched stickup after her hours are cut. All are spending almost everything they have on rent, and all have fallen behind.

The fates of these families are in the hands of two landlords: Sherrena Tarver, a former schoolteacher turned inner-city entrepreneur, and Tobin Charney, who runs one of the worst trailer parks in Milwaukee. They loathe some of their tenants and are fond of others, but as Sherrena puts it, “Love don’t pay the bills.” She moves to evict Arleen and her boys a few days before Christmas.

Even in the most desolate areas of American cities, evictions used to be rare. But today, most poor renting families are spending more than half of their income on housing, and eviction has become ordinary, especially for single mothers. In vivid, intimate prose, Desmond provides a ground-level view of one of the most urgent issues facing America today. As we see families forced  into shelters, squalid apartments, or more dangerous neighborhoods, we bear witness to the human cost of America’s vast inequality—and to people’s determination and intelligence in the face of hardship.

Based on years of embedded fieldwork and painstakingly gathered data, this masterful book transforms our understanding of extreme poverty and economic exploitation while providing fresh ideas for solving a devastating, uniquely American problem. Its unforgettable scenes of hope and loss remind us of the centrality of home, without which nothing else is possible.

I put this book on my list a while back after I heard an interview with Roxanne Gay where she was asked, “what the last book you read that infuriated you?” and she named Evicted. I immediately thought to myself…’I feel like getting fired up right now’ so I put it on my list and man…this book lived up to those words. In fact, ‘fired up’ doesn’t even begin to address how I felt after reading this one.

Little back story on me: I grew up in the suburbs of Buffalo and when I turned 18, I remember the first thing I wanted to do was get the hell out of the suburbs and into the place where I felt I could be more myself. So my friend and I rented a HUGE apartment (read: heating bills that nearly put us into bankruptcy) in a neighborhood we could afford the city of Buffalo where gunshots had us ducking in our living room, shotguns were pulled on us by the neighbor across the street, drug exchanges happened at all hours of the night in the apartment next to us, and where we sat on our porch roof eating jello cups and watching a woman chase a man down the street with a giant metal pipe. It wasn’t what you would consider a neighborhood ours moms wanted us to live in, but we loved it, made a lot of friends with the neighbors, played with the little girl downstairs named Queenie and brought her ice cream in the summer because she was allergic to the sun, helped her brother pick out the best clothing for his fashion show (he was muchhhh better than us, we just liked the drawings of the clothes that he created), walked out to the bars at night, and felt a real sense of neighborhood from this first apartment. I remember walking into the apartment with the landlord (who was a sketch lawyer in the city we found out later) and as he showed us the place he assured us he would have the piles of shit (literal shit) and huge holes in the walls fixed before we moved in. We excitedly handed him our security deposit and that was that.

Fast forward a lot of years later, to me reading this book and the entire time I just kept thinking…and this is where my path and the people in this book’s paths veered separate ways. I had suburban parents that weren’t happy I moved out, or where I was living, but probably weren’t going to let me live on the streets. I didn’t have kids who had to go to school and needed a stable home to succeed in. I didn’t have to decide between eating that day or getting to my job. I was living a life of white privilege in an environment that might have done in any of these people we read about in Evicted.  Plus, if we were a few days late on rent, there wasn’t even a question asked from our landlord, he just assumed we’d get it taken care of…we were lucky. So the whole time I was reading this book, I just kept thinking to myself…if I had different color skin, if I didn’t have parents to bail me out financially when I got myself into some trouble, if I didn’t have a dad who helped me fix my car when it broke down on the highway, if I wasn’t in college getting a degree, if I didn’t have a landlord that trusted that we would pay the rent more than most…my life would have looked very differently than it did. My story may have looked a lot more similar to the stories in Evicted.  Don’t get me wrong, I am very grateful for my position in life, but how does this bode for the rest of society? Those people who are born with brown skin in a struggling city, or really any city for that matter. Those people who don’t have parents to fall back on when times get tough? Those people who depend on unreliable public transportation to get them to and from their jobs? Those people who have addictions? Well…those answers are in this book and spoiler alert, the answer is never pretty. I was never in actual fear of homelessness, true poverty, nor the constant threat of eviction-those thoughts really never crossed my mind. I can’t imagine if I was trying to live my days with those constant threats in the back (or front) of my mind, but throughout these stories, we see what that feels like, how it deems your present and future and how it sets a person on a path that is nearly impossible to divert from. It’s truly eye-opening.

Desmond suggests a universal housing voucher program and throughout the book I just kept thinking…why the HELL do we not have this program. It’s a relatively simple idea where anyone under the poverty line could take their voucher and use it to rent an apartment on the private market. As of right now, we have Section 8, but this is terrible program that just, simply put, isn’t working for most of the people in need of housing assistance. There are specific homes designated for Section 8, there is a lottery system to get into the program, so most families spent years on a waiting list, and the other rules and limitations make it nearly impossible for many families to receive Section 8 at all. Here is a great article that helped me better understand the program, Section 8, and what a voucher program would look like.We need some major changes in this country in terms of how we treat all of our citizens. This book gives us a real perspective on what life looks like for many families living in our community, what their struggles are, and how they got there. It’s sure to make you angry and sad, but ultimately, I think it will make you want to get out there and try to make some real change. Desmond is coming to our city for a book talk and I’m thrilled to listen to how our community is being affected and what we can do to help bring fairer practices to the housing crisis in my own community. Whatever your current situation is in life right now, I think this book is for you. It’s eye-opening, important, needs to be read and is sure to fire you up-you’ve been warned.