Where I picked up my book: Thrift store find 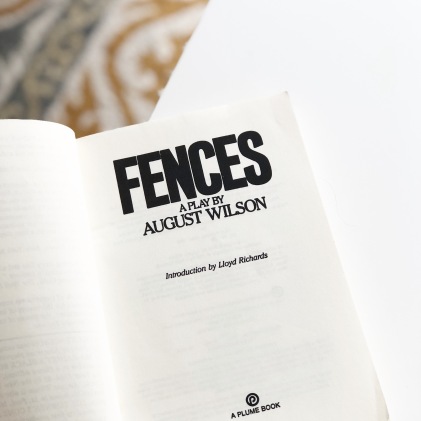 From August Wilson, author of The Piano Lesson and the 1984-85 Broadway season’s best play, Ma Rainey’s Black Bottom, is another powerful, stunning dramatic work that has won him numerous critical acclaim including the 1987 Tony Award for Best Play and the Pulitzer Prize. The protagonist of Fences (part of Wilson’s ten-part Pittsburgh Cycle plays), Troy Maxson, is a strong man, a hard man. He has had to be to survive. Troy Maxson has gone through life in an America where to be proud and black is to face pressures that could crush a man, body and soul. But the 1950s are yielding to the new spirit of liberation in the 1960s, a spirit that is changing the world Troy Maxson has learned to deal with the only way he can, a spirit that is making him a stranger, angry and afraid, in a world he never knew and to a wife and son he understands less and less.

I, 100%, thoroughly enjoyed reading this play. It explore themes of family dynamics, family values, misogyny, the African American experience, racism, death, love, responsibility and parenting…to name a few, but we sort of see it all through the veil of Troy. He is a character that I loved and hated at the same time. I rooted for him, and I wanted to see him disappear as he spoke the same sentence. He makes questionable decisions in his life, but he’s also a Black man just trying to survive and make it in the world that is not set up for him to succeed. He was real and one of the few characters in literature that I really feel represents what it feels like to be human, and more importantly, what it might feel like to be a Black human. (side note: I am not a Black human, just so we are clear. I don’t ever want to assume I fully comprehend the experiences of a race other than my own-that will never happen. Through this piece and other fantastic pieces of literature though, I am learning to empathize and better understand life through another lens other than my own). And Rose…oh, I couldn’t have loved Rose more or wanted someone to succeed more than Rose if I tried. I think this is an important piece of literature that you should run out and get a hold of asap. Recently, it’s been turned into a play starring Denzel Washington and Viola Davis (both of whom I love) and that has just become a part of my weekend plan! Fences has earned its reputation as a classic and remains as relevant today, as it did when it was first performed. It feels like a piece that isn’t meant to be read and put down (or watched and put aside), but instead, it’s a piece that warrants discussion and some deep diving. If you read or watch it, I would love to talk about it with you.