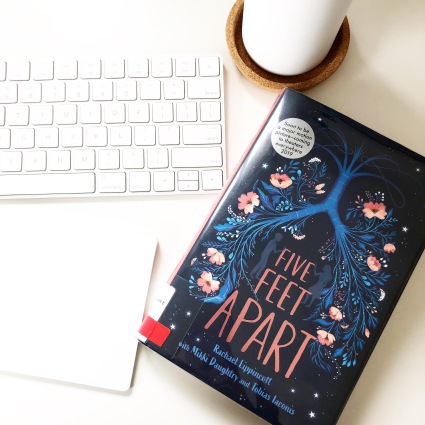 Can you love someone you can never touch?

Stella Grant likes to be in control—even though her totally out of control lungs have sent her in and out of the hospital most of her life. At this point, what Stella needs to control most is keeping herself away from anyone or anything that might pass along an infection and jeopardize the possibility of a lung transplant. Six feet apart. No exceptions.

The only thing Will Newman wants to be in control of is getting out of this hospital. He couldn’t care less about his treatments, or a fancy new clinical drug trial. Soon, he’ll turn eighteen and then he’ll be able to unplug all these machines and actually go see the world, not just its hospitals.

Will’s exactly what Stella needs to stay away from. If he so much as breathes on Stella she could lose her spot on the transplant list. Either one of them could die. The only way to stay alive is to stay apart. But suddenly six feet doesn’t feel like safety. It feels like punishment.

What if they could steal back just a little bit of the space their broken lungs have stolen from them? Would five feet apart really be so dangerous if it stops their hearts from breaking too?

I have to say, before I “met” @readwithkat on Instagram, I didn’t know much about Cystic Fibrosis (commonly referred to as CF). When I was little, we had close neighbors who had a daughter that passed away from CF before I was born. They were like grandparents to me, but it was painful for them to talk about what she died from, so we always just talked about HER, what she liked to do as a kid, and they were constantly giving me items that used to be hers. I think they wanted to make sure she wasn’t defined by her disease. My parents just said she had trouble breathing, and that was that. I remember being so curious, but I knew not to ask too many questions. I think CF was a very difference experience 60 years ago than it is now, but the fact of the matter is, even with all the medical advancements that have been made, CF it is a terminal disease. People with CF usually have a shorter life span than the average person, and as of right now, the disease does not have a cure. I’ve learned a lot from Katharine (@readwithkat) and I’d highly suggest you look her up on Instagram to learn more AND to get some rad book recommendations. For additional information, you can also go to the Cystic Fibrosis Foundation website.

In regards to this book, I really enjoyed it. I should preface this with saying, it’s YA and certainly reads like a YA novel. I wasn’t the intended audience for this book (it’s definitely written for middle grade-young adults), but I enjoyed it, learned a lot from it, and was completely sucked into the story from the beginning. And can we talk about that cover?! This book deals with what it’s like to live with CF (from these characters point of view. Let’s remember CF can present itself in completely different ways from person to person). It also deals with what it’s like to feel isolated-people with CF cannot be within 6 feet of another person with CF, what teenage love feels like and the fears that creep in, or in some cases, is constant, when you have an illness. It shows how friendships are affected, how nurses and doctors can play a role in an illness and what it feels like to need regular treatments to survive. It deals with a lot of emotions and situations I remember feeling and experiencing as a teen, but exacerbate it 1,000x’s over by putting a disease in the mix.

It was a whirlwind of emotions for me and definitely worth the read. There is a movie coming out this month and I’m looking forward to seeing it! Have you read it? What did you think?