Where I picked up my book:  Publisher (#partner) THANK YOU! 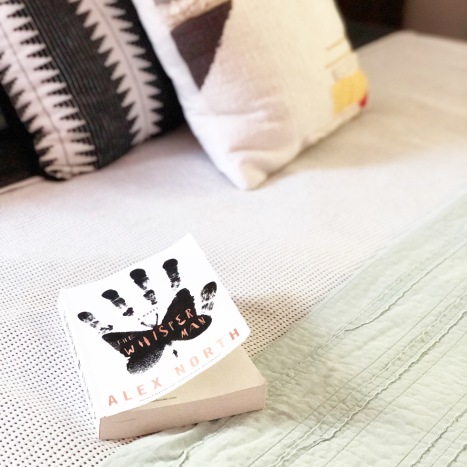 If you’re like me and the Summer/early Fall is for psychological thrillers full of creepy feels…then The Whisper Man is coming out just in time! I don’t read a ton of thrillers, but I LOVE to pick up a good one, during the longer daytime hours ;), and get totally engrossed, flipping through the pages as fast as I can, until A. I finish, or B. I hear a noise somewhere in the house and I literally cannot deal with reading it anymore. God forbid the sun has gone down and I’m still engrossed lol. That happened a few times with this one (as you might be able to tell, I’m a bit of a wuss when it comes to thrillers…but listen to this and you might see why I may never read a thriller at night again)!! One evening I got sucked in and was reading The Whisper Man long into the night, completely creeped out with the idea of a serial killer whispering outside of a child’s bedrooms to lure them outside the safety of their home. WHAT?! My wife was sound asleep-never helpful when reading a creepy book

I finally exhausted myself and fell asleep. A few hours later, I woke up to my dog growling (she NEVER does that) and I heard  a little girl sing-songy whispering in another room in my house. I nearly sh*t my pants. I’m not kidding. I’ll get to the point because I’m starting to sweat just thinking about this-after some investigation where I turned every light on in the house, had my phone dialed up to 91 and ready to hit the other 1 at a moments notice, and forcing my dog to come with me even though she was all of a sudden terrified to move from the bed (side note: wife is still sound asleep), I realized what was going on and sighed a sigh of relief like I’ve never sighed before. The publisher included a card introducing the book to us that when opened, it was a little girls voice whispering the catchphrase of the book. The card must have gotten cracked open and low and behold, it was what I was hearing. I’m not even kidding. Lord have mercy. So that’s how creepy I found this book and also…why I will forever read thrillers in the daytime or with every light in the house on (but then I can’t see out the windows so, Oyyyyye). But I digress…

This was a creepy, heart-pounding, unsettling and well-paced read that is full of character development, family dynamics, imagination and quite detailed, beautiful writing. I don’t want to give too much of the plot or my thoughts away because I think going in relatively blind is always more fun with thrillers, but just know The Whisper Man is sure to keep you up long into the night flipping pages, ferociously trying to find out what is going on. It’s a page-turner that is sure to give you all those creepy vibes and BONUS! I just read that it’s been snapped up by the same production company that created various Marvel films and Arrested Development. So read the book before movie comes out and let’s all be completely creeped out together!!

As always, find me over on Instagram and let’s chat books! The Whisper Man comes out on August 20th-don’t miss it for your end of summer/beginning of Fall, perfect, creepy read!

In this dark, suspenseful thriller, Alex North weaves a multi-generational tale of a father and son caught in the crosshairs of an investigation to catch a serial killer preying on a small town.

After the sudden death of his wife, Tom Kennedy believes a fresh start will help him and his young son Jake heal. A new beginning, a new house, a new town. Featherbank.

But the town has a dark past. Twenty years ago, a serial killer abducted and murdered five residents. Until Frank Carter was finally caught, he was nicknamed “The Whisper Man,” for he would lure his victims out by whispering at their windows at night.

Just as Tom and Jake settle into their new home, a young boy vanishes. His disappearance bears an unnerving resemblance to Frank Carter’s crimes, reigniting old rumors that he preyed with an accomplice. Now, detectives Amanda Beck and Pete Willis must find the boy before it is too late, even if that means Pete has to revisit his great foe in prison: The Whisper Man.

And then Jake begins acting strangely. He hears a whispering at his window…