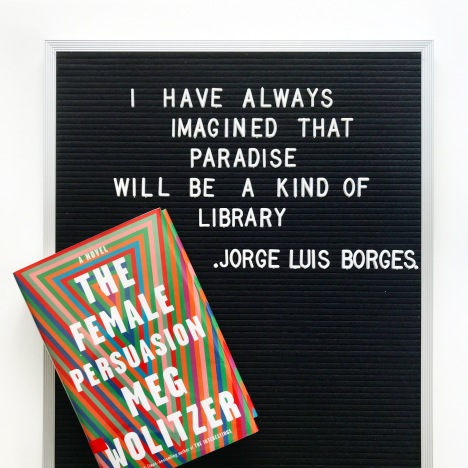 Greer Kadetsky is a shy college freshman when she meets the woman she hopes will change her life. Faith Frank, dazzlingly persuasive and elegant at sixty-three, has been a central pillar of the women’s movement for decades, a figure who inspires others to influence the world. Upon hearing Faith speak for the first time, Greer- madly in love with her boyfriend, Cory, but still full of longing for an ambition that she can’t quite place- feels her inner world light up. And then, astonishingly, Faith invites Greer to make something out of that sense of purpose, leading Greer down the most exciting path of her life as it winds toward and away from her meant-to-be love story with Cory and the future she’d always imagined.

Charming and wise, knowing and witty, Meg Wolitzer delivers a novel about power and influence, ego and loyalty, womanhood and ambition. At its heart, The Female Persuasion is about the flame we all believe is flickering inside of us, waiting to be seen and fanned by the right person at the right time. It’s a story about the people who guide and the people who follow (and how those roles evolve over time), and the desire within all of us to be pulled into the light.

First, what I loved about this book…It is definitely a relevant book right now with women’s rights being at the forefront of our society and media, what is currently happening in our political climate, and the “me too” movement sweeping the nation where women are feeling the power to stand up to the misogyny and abuse that they we have experienced for so many years. It feels like a powerful time and as a women, I am so proud to stand up and be a part of it. So when books are written with these themes, it make me feel like we are being heard, people are talking, and things are changing-so…give.me.all.the.books! Second, I always love books that look at people from different generations and compare and contrast them. In this book, Greer (the main protagonist) and Faith (Greer’s mentor) deal with their feminism and the idea that they are both fighting the good fight, but they are coming at it from two different generations-which is not only an issue for them, but I think rings soooo true for feminists today. I see it all the time with friends and family older than me, and I also see it in women younger than me too. We come at feminism in quite different ways, and although we are all truly fighting the good fight, we have so much to learn from each other, and this book definitely deals with that. Third, I LOVE when characters are flawed…and these characters, all of them, are just that. People are flawed, I am certainly flawed, so give me real characters and I’m sold. This definitely happened in The Female Persuasion.

With that said, I definitely struggled with one major thing throughout the book. To me, it seemed as though Wolitzer had a list of current topics that she wanted to cover and subtopics she wanted to include in her novel, and as she included them within the narrative, she checked them off and moved on to the next. It felt jam-packed full of subjects and talking points, each wedged into the narrative, and instead of delving into each idea a bit more, it was mentioned, checked off, and moved on from. I would have liked to see a bit more insight into each of these major topics, so readers could gain a better understanding of what is going on in the real world-to me, that’s when the real learning happens.

Overall, I really enjoyed The Female Persuasion.  I think it would make a fantastic book club choice where the readers take the topics Wolitzer brings up and really gets into the nitty gritty.